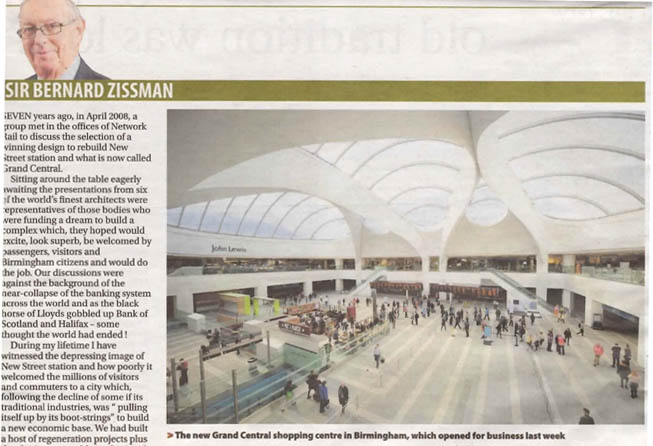 The Redevelopment of New Street Station 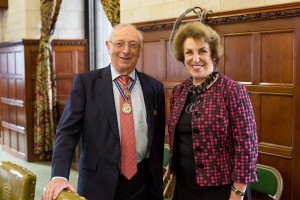 September 2014 was the month when a unique event was held at the House of Commons in Westminster, London. The occasion was the presentation of Lord of the Manor to two prominent Chinese businessmen, Mr Zhu (Lord of Leiston) and Mr Zheng (Lord of Sutton Howgrave). Hosted by the Rt Hon Tony Baldry MP, the keynote speaker was former Government Minister Edwina Currie with the presentations being made by Sir Bernard Zissman. The recipients, in addition to their Chinese business interests are establishing a business enterprise in the UK and received their Lordships in recognition of their philanthropic and charitable generosity. 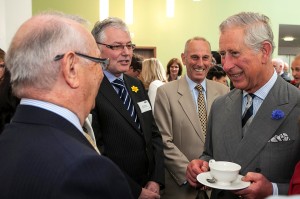 Following his record breaking Debatathon in aid of the charity at the opening of the Marie Curie Hospice in Solihull,, Sir Bernard enjoys a cup of tea and a joke with HRH The Prince of Wales.

On April 17th 2013 Sir Bernard took on all comers in an attempt to create a world record by debating non stop for 12 hours in the DEBATATHON. Held to support the new Marie Curie Hospice in Solihull and Andrew Cohen Residential Care Home in Birmingham, the debate was held at Millennium Point between 8.30 am and 8.00pm. Sir Bernard  tussled with twelve guest debaters winning seven debates, losing four and drawing one ! Many thanks to the chairmen, debaters and supporters who helped us smash our target and raise in excess of £15,000

The International Convention Centre (ICC) Birmingham has contributed a remarkable £1.4* billion to Birmingham’s economy since opening its doors on 2 April 1991

The figure is announced by the ICC in celebration of the venue’s 21st anniversary this year.

Managing Director Nick Waight has been with the ICC from the very beginning, joining the team as an Account Manager at the age of 22. Working his way through the ranks, Nick has been instrumental in turning the ICC into the award winning venue it is today.

“It is a real honour to be able to say that I am part of the ICC legacy. The building has an incredible history and has been a catalyst for many local businesses, which have been able to grow as a result of the economic benefit our industry brings to the city.

“Over the last twenty one years we have hosted over 6000 events, which translates into over 330,000 delegate days a year.

“Our portfolio of clients has flourished year on year to include some of the biggest corporate businesses of today, such as Mercedes, Lexus, KPMG and Walmart. We have also had the privilege of hosting all of the major party conferences, as well as the G8 Summit in 1998. The Conservative Party Conference in 2010 alone produced a staggering £47 million direct economic impact for the city.

“Our people have helped deliver some of the most amazing and high profile events over the last 21 years. Whatever the event, whether it is a conference for 3000 people or a meeting for 8, our teams have a bank full of years of experience and expertise to help our clients get the most out of their event. Our focus going forward is to capitalise on the expertise of our people to continue to deliver seamless and world class service for our clients and delegates.”

Sir Bernard Zissman, ex-Lord Mayor of Birmingham, led the team which developed the International Convention Centre and Symphony Hall in the mid eighty’s. He said:
“I am very proud to have led the team which developed the concept of the ICC and Symphony Hall and was successful in convincing Birmingham City Council to support the initiative.
“The feasibility study which was carried out to support the development and building of the venue saw considerable economic benefit, but it was nowhere near what has actually been achieved.

“One of the main purposes of the ICC was to provide a new industry for Birmingham which employed people, and not machinery, as at the time Birmingham’s manufacturing industry was in clear decline and there was a growing number of youth unemployment.

“The ICC was one of the first new buildings to be built in Birmingham, and I truly believe it was the seed for the regeneration and development of Birmingham we have seen take place over the years. The ICC saw the birth of Brindley Place and the hundreds of hotels and restaurants in the city, supporting over 50,000 jobs today.”

Since its opening the ICC has won a number of awards, most recently of which the venue was voted the best overall venue by readers of the Birmingham Post and Mail in the 2012 Best of Broad Street Awards (BOBS). The venue has also been crowned the Best UK Conference Centre by M&IT Magazine six times and has a number of ISO accreditations.

Ian Taylor, Commercial Director at Marketing Birmingham, the city’s strategic marketing partnership which operates Meet Birmingham, said:
“Birmingham is leading the way in the business tourism sector, and the ICC’s role in the city’s continuing success as a top conference and events destination cannot be underestimated.

“The venue’s high-profile events have played their part in boosting Birmingham’s visitor economy, which has seen a record number of visitors and overall spend in the last five years, to 32.8 million and £4.6 billion respectively.”

Read the original press release from The ICC here, or visit their website, The ICC Birmingham.